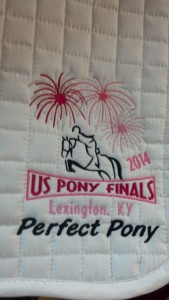 Pony Finals has a long and illustrious history in the Hunter/Jumper world. It’s a special event that occurs once a year. Ponies must qualify for the Finals by earning points throughout the year. A sense of achievement is felt simply by receiving a spot in the entry roster.

Personalized Products first started attending Pony Finals in 1995 when it was held at Brownland Farm in Franklin, Tennessee. It wasn’t until 2002 when the Pony Finals were being held in Lexington, Kentucky, that we first introduced our souvenir saddle pad. It was created so that the kids would not only have a souvenir that would remind them of Pony Finals, but also be a functional item that could be used on a daily basis.

The design that’s embroidered on the pad changes on a yearly basis. Carrie (co-founder of Personalized Products) is the sole creator of the design each and every year.

The creative process begins months in advance, with ideas and concepts percolating away. Once she has a general theme for the design, Carrie sits down at the computer and begins to “program” the design using special embroidery software. Each stitch is manually drawn and/or inputted into the computer. The task can be long and arduous.

Once the design has been digitized using the embroidery software, a test sew-out is conducted. By sewing out the design in a practice run, any technical details or imperfections can be realized and adjusted for in the final design. After the design has been sewn out, and tweaks have been made, the final result is ready for sale. 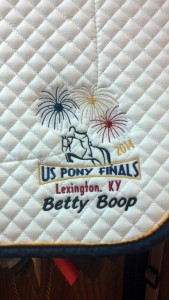 We’re very proud of the success of our souvenir Pony Finals pad. It’s so rewarding to see the smiles on the faces of our customers when they pick up their pad. We also love hearing that the saddle pads have become somewhat of a collector’s item amongst our repeat Pony Finals competitors. We’re already looking forward to Pony Finals 2015!